"Without question, this BPYO rendition of Shostakovich Ten was one of the most urgent and necessary of any symphonic score I’ve heard all year." – Arts Fuse Concert Review: Boston Philharmonic Youth Orchestra at Symphony Hall

"The BPYO is way more than just a youth orchestra: it’s a world-class ensemble that happens to be made up (mostly) of teenagers. They return to action for the new season the Sunday after Thanksgiving with Anna Federova playing Rachmaninoff’s Piano Concerto no. 2 and music director Zander conducting further works by Carl Maria von Weber and Dmitri Shostakovich."  - Arts Fuse Fall Arts Preview -BPYO

"Forget the fact that this is an orchestra made up of kids aged 12 to 20; they’re one of the finest ensembles in the country, period". - Arts Fuse: Concert Review: Boston Philharmonic Youth Orchestra at Symphony Hall

"Rising from the insuppressible enthusiasm of maestro Benjamin Zander—who founded the (senior) Boston Philharmonic Orchestra 40 years ago—this ensemble of fantastically talented 12- to 21-year-olds delivers exactly what you want from a night at the orchestra: to be blown away. Whether playing the notoriously difficult Mahler (one of the maestro’s specialties) or another canonical composer, they deliver youthful energy and just a touch of wonder." -Boston Magazine, Boston Magazine: Best of Boston 2019


"One could not hope for brighter, more attractive and hope-inspiring emissaries from the America we hold dear. They can serve with certainty to summon our better angels." -Lee Eisman, Boston Musical Intelligencer: BPYO Rewards Grateful Community

"Hearing this contingent for the first time, and, believe or not, Zander for the first time, I can attest as a satisfied listener and critic that much of the execution reached completely professional levels" -Crawford Best, Boson Musical Intelligencer

"there was no want of love in the orchestra’s playing, or in the interpretations of BPYO founder and conductor Benjamin Zander." -Jeffrey Gantz, Boston Musical Intelligencer: Zander & BPYO Ask What Love Tells U

"In the right hands even a group of talented kids can give us the best Mahler of the year." -Lloyd Schwartz, WBUR

"Under the brilliant direction and tutelage of its founder Benjamin Zander, the Boston Philharmonic Youth Orchestra may well be considered competitive with world class ensembles." – Wunderhorn

"There was an elegiac quality to the BPYO’s spring season finale: the program was both a commemoration of the end of World War 1 and a farewell to the ensemble’s graduating members. And its inclusion of Ives’ visionary The Unanswered Question served as a memorial for guest conductor John Heiss’s son, Frank, who had died unexpectedly a few weeks earlier. The latter, given the full spatial treatment – string aureoles emanating from the lobby in Sanders Theater framing a solo trumpet up in the balcony and a quartet of flutes onstage – was this packed year’s unforgettable moment. Full review here." -Arts Fuse: Best Performances of 2018: BPYO plays Ives May 7 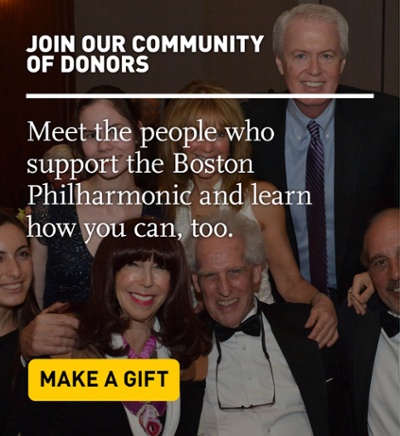